Our Universe Is A Multiverse.

The concept of a multiverse, a cosmos with multiple different universes, is often brought up in creation vs evolution debates.  It really irks me, but this time not because of what fundamentalists say – but because of what evolution proponents say.  Often they rely on the concept of a multiverse to justify the probability of life existing.  They say “well if there are an infinite series of universes with different properties, certainly one of them is likely to be a universe where life is possible”.  In this blog I will show how this is flawed thinking, not because the concept of multiple universes is unproven (though of course it is), but because our singular, solitary universe for all intents and purposes is a multiverse.

I know this is confusing, but bear with me, it’s actually pretty cool.

The concept of a multiverse is invoked in these debates because the idea is that our universe does not have enough variety and potential for complexity, so we need many more universes with different sets of properties, different periodic tables, maybe another universe where gravity is 20% weaker and matter doesn’t behave the way it does here.

The reason this is silly is that we already have that in our universe.  If you want to see what a universe would be like where gravity is stronger or weaker, you don’t need another universe, you just need to be further from or closer to a source of gravity.  In a universe where gravity is 10% stronger you wouldn’t have anything different than what you have in this universe, stars would just be 10% hotter and brighter by volume, so if you want to see a star like that one, find one with 10% more mass in this universe.

How about the elements?  They behave in a consistent manner, so don’t we need a multiverse to have enough variety to make life possible?  Nope.  This is flawed on several different levels – first of all matter behaves very differently in different environments, most elements have a gaseous state, a liquid state, a solid state and a plasma state, so depending on the temperature range of an environment, that is effectively five different universes with five different sets of properties right here in our universe.  If it were cold enough you could build a solid house out of bricks of air.

The other reason why this is flawed thinking is that the chemical elements have dramatically different properties depending on their arrangements.  X atoms have x properties, y atoms have y properties, mix them together and they have z properties.  Put salt in water and it has a different melting, freezing and boiling point for instance.  So it is not as though we have a hundred or so elements with set properties and that is that, the properties and potential for complexity of our universe is limited not by the number of different particles (all elements are just combinations of only 2 particles after all, protons and electrons).  Instead the potential for complexity is determined by how many different ways those particles can be combined to produce different properties.  So how many combinations are there?

The answer: A big, big, big, big number.  Too big to even know for sure how big it is.  To give you an idea how big, I will quote wisegeek.com:

“In 2005, a group from the University of Berne, in Switzerland, tried to determine the total number of stable compounds with up to eleven atoms of just carbon, hydrogen, oxygen, nitrogen, and fluorine. Their number was just under 18 billion, but a subsequent analysis found they ignored many common chemicals, including many which could be easily ordered online, and the number may have been low by as much as three orders of magnitude.”

18 billion chemicals with 18 billion sets of properties was a lowball estimate of how much potential for variation you could get by mixing a limited number of just five of the one hundred and eighteen known chemical elements.  And they limited themselves to only 10 atoms per molecule, when organic chemicals (like DNA) can contain literally hundreds of billions of atoms and the largest known genome contains about 40 trillion atoms, over 200 times the size of the human genome.  The website continues:

In other words, the universe, with all of it’s billions of galaxies containing billions of solar systems and unimaginable vastness, does not even have enough matter to make one of every possible chemical simultaneously.
So I ask you, do we need to invoke a multiverse to account for life, or does our universe have more than enough potential for variation and complexity?  And by more than enough I mean “enough to make your brain hurt while you still haven’t even begun to grasp one percent of one percent of one percent of the unfathomable vastness of it”.

But the weirdness doesn’t end there (and I mean weird in the most positive, exalted sense of the word).  The “our-universe-is-effectively-a-multiverse” way of looking at things can also be seen when you add time as a factor.  Because we live on a planet that is capable of supporting the type of life we have on earth – but it did not used to be able to support any known form of life, and it will in the future not be able to support any known form of life.  Planets and stars and solar systems are not static.  Though they may seem incredibly stable due to the magnitudes of time it takes them to change significantly, they do change dramatically.  Earth today is a far cry from the molten ball of liquid magma it once was.  And a far cry from the frozen mars-like wasteland it will one day be.

Weird enough?  There’s more : )  If you zoom out even further and keep time as a factor, the universe itself has gone through serious changes.  During one period for instance the universe was too dense and hot for light or any form of matter we know of to even be possible. 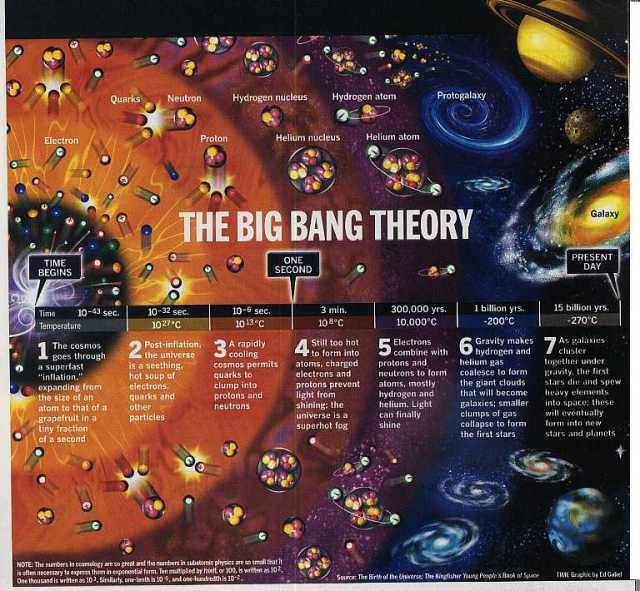 Then once it expanded and cooled light became possible and protons and electrons could form, but there was only one element – hydrogen.  Only after the formation of stars were other elements made from hydrogen and today after some 14 billion years or so only about 1/10th of the universe’s hydrogen has been converted into other elements.  How is a universe so dense and hot that no known form of matter is even possible not effectively another universe with different properties?  And who knows what the universe may be like a hundred trillion years into the future.

Either way the universe is impressive enough, we don’t need to invoke another one (or an infinite series of them, what a joke!) to account for life or complexity, or the amazing vastness of it all.  And when people put down reality or nature as if it were nothing much (as religious folk often do to bolster belief in the supernatural), it seems to me like, well… blasphemy.

20 Responses to Our Universe Is A Multiverse.